I go to church because I want something. I want to feel “full” by the time the hour’s over and I want to exit those doors with something I can chomp on throughout the week. Something to carry me through the weirdo challenges that life throws at me during Monday, Tuesday, Wednesday, Thursday,  Friday and Saturday. And of course, to tell, sing and meditate my thank you to God for getting me through the previous week.

So, like any other Sunday, I went. And I got fed.

But I didn’t think the food would have me praying a schizophrenic prayer.

The topic was “Forgiveness” and how forgiveness and forgiving is our most critical need as humans.  The Mayo Clinic even has studies to prove it.  As the pastor talked about how when we hold on to old hurts, old words and deeds, they take root and rupture the foundation of our lives I sat. Ears pricked, but I was, admittedly, a tad smug. Seriously...I’ve let old hurts go and my life is pretty peachy. But then he said something that got me in my gut: he asked us to think about whether there was someone in our lives who, if they sat down next to us – right now – would evoke some kind of visceral reaction.  Hoohboy.  At least five people came to mind.  Cringe. We were reminded that praying for those very folks could release us from bitterness and stress and all the other kinks that unforgiveness plants in us. So I prayed.

Then I straightened my halo and went home feeling good.  I was full.

And then not even six hours later, Jamie ticked me off.  Really ticked me off.  [For real?  I’m being tested on this stuff NOW? Jamie wasn’t even on my list of repulsive people! This blows.]

Okay, Lord I get it. I shall pass this test and pray for him:

Lord, I don’t even know what I’m supposed to say but could You move him? I mean, You made him, so You can fix him; there’s got to be some kind of warranty or something. Really, he’s wrong. I’m right. So please show him that I’m right.

Father, this is ridiculous. HE is being ridiculous. You said that I’m not supposed to let the sun go down on my anger, and it’s getting pretty late…so, uh… when are You going to shine the light on my…uh….righteousness? You do what's best in Your wisdom. My straightened halo and I shall wait patiently.

Okay, this really sucks.  And You’ll forgive me for saying ‘sucks’ because Your grace is boundless.  Oh yeah, that’s right: Your grace is extends to me even when I say stuff like ‘sucks’ (and ‘blows’ earlier) so the least I can do is forgive him?  Really forgive him? This is some yucky old food. Blech.

I went to church to get fed today. Thanks for the food. I guess I didn’t count on it choking me on my pride. Thanks, Lord.  I sure don’t like it, but I’ll thank You for it anyway.  Besides, the sun’s been down for hours now. I get it.

Football is a Martian's Game

Sometimes I don’t understand Jamie, and sometimes he doesn’t understand me.  It’s not an indictment of our marriage, it’s more of a man/woman thing.  The two sexes are wired so differently that it’s been said men are from Mars and women are from Venus.

I think the game of Football proves it.

Mental Wiring
Remember playing with the neighbor kids and there was always one kid who made additional rules up as they went along and by the end of the game, no one understood anything except the kid who made up the rules? Wasn’t the Rule-Maker-Upper usually a Martian?

I think that most Rule-Maker-Uppers grow up to be this guy:

Martians are wired to not only be this guy; but they’re also wired to listen to and understand guys like this.  A Venusian, on the other hand, can’t get through this twenty-seven second clip without banging her head on a table.  (At least this Venusian can’t) They can, however, remember a pediatrician’s phone number, office hours and when a child had the last round of vaccinations.  This isn’t an indicator of who’s smarter, just a difference in wiring. The difference isn’t only mental.

It’s Physical Too
I’ve heard few women say of childbirth: “Oh, it wasn’t that painful.” and any idealist lilting about birth pain being forgotten after a new arrival is usually still high from anesthesia. I love my daughter with every fiber of my being, and even after nine years, I haven’t forgotten about labor pain. It was an intense rhythmic twisting and turning and wringing of my guts like none other. Pre-epidural pain certainly isn't anything I would have chosen.

Unlike a quarterback. He waits for the snap. Waits for it! And then in the few seconds he has the ball, it’s like he’s screaming “Look at me!  I got the ball!  C’mon…Hit me!”  And he does get hit.  Hard.

Yet somehow QBs are OK with risking that big hit.

Who does that? A Martian, that’s who. A Venusian QB would take a more cooperative, less-aggressive approach and either:
Childbirth is one thing. Willingly accepting a ball at the risk of a freakishly large man smacking the You-Know-What out of you for it is quite another.

Our Emotional Wiring Could Possibly Be the Same But…
Team members hug each other, openly weep tears of joy and some even take a knee to thank God for a win.  They celebrate together. 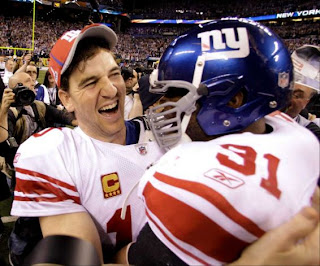 That’s all lost in a loss, though; and it’s sadly ironic because when someone grieves, people touch them, pat their backs, hug them; or even pray with them if that’s what they need. People generally grieve – just like they celebrate – together.

But not Martians on the losing team. They aren’t expected to mourn together, so they grieve alone post-game. 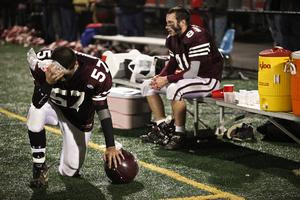 Don’t believe me? Just imagine if those crestfallen guys wept, hugged and comforted each other openly right after losing a game. See what I mean?  Venusians on other hand, can cry, hug and handhold to get through major defeat – even on camera.

Then again, maybe I’d understand it if I was from Mars.
4 comments: