This New Year's Got Me Hungry

It's the last day of the year, and as I peruse the pages, the hours of each of the 364 days, I realize that I am hungry. Given, if you compare pictures of New Year's Eve Me 2016 to 2017's New Year's Eve Me, you'd be wondering how in the name of all that's holy, can I be hungry.

But I am hungry. And I'm realizing this 2017's lingering hunger is a manifestation of inward starvation.

This past year, there's been so much that's starved me: everything from a dads dying -- DYING-- on social media, to grown children whose parents didn't live to see this day, to the unspeakable anguish of friends who have buried children.

Then there were the DudeBros chanting Jews will not replace us, to a crowd being plowed over by a car that ultimately resulted in the death of a mother's baby.

Then there's the horror of a President who won't call evil for what it is. And then sometimes -- a lot of times -- I've felt broken by folks who call themselves Christian and turn a blind eye to evil and/or justify evil.

But even so, my hunger carries hope.

I'm hungry for courage to call out wrong for being wrong. Courage for myself to do so, and the same for my family in Christ to do the same.

I'm hungry for grace that says I've been blessed with a roof over my head, food on my table, and a stable family. Grace that says there for the grace of God that I or my child could have a disease I couldn't afford without good healthcare.

I'm hungry for ears and a mind so open that views that unlike mine evolve into a conversation bent on understanding instead of a yelling match to outwit one side into winning or losing.

I'm hungry for empathy in the simplest of things. The kind of empathy that helps a stranger in the grocery store find the peanut butter because you remember when you nearly had a breakdown that one time because the dish washing liquid wasn't where it had been for millennia.

Let's raise a glass and hope that 2018 feeds us all.
No comments:

Dig if you will the picture: On a ordinary Saturday, kids show up at high school detention to pay penance for any number of infractions. They're all there: the Jocks, the Stoners, the Brains, the Perpetual Outsider and even the embittered detention monitor.

A poisonous explosion blankets the town or the world, and our kids are now on lock down. The explosion didn't cause deaths, but it left multitudes of Undead ravenously hungry for the living.

It's The Walking Dead meets Breakfast Club. Actually, it's Freakish, a series on which my daughter was binge-watching over Christmas Break. Because I wanted to be the cool mom, I watched it with her.


It was a predictable, corny plot: Undead people crazily run in stopmotion and feast on the living -- of course, in between the survivors' teen romance, angst and anxiety. Just my daughter's speed, but not so much for me.


Meanwhile, my usually quiet and composed daughter was like

Of course, the living kids find a way to hook up (in a TV-14 way), break up AND Vlog. One of their Vloggers revealed that All of us have our phones...I didn't want to ruin it for my daughter, so I fought every impulse to ask how they were even getting a signal if the world was destroyed.

But Princess Vlogger went on But none of us thought to bring a charger. And at that point, I lost it:

You know, if this had been a group of mothers, they'd be surviving in comfort.

WHAT? She snorted and rolled her eyes.

In a gush of what could or could not have been word salad, I explained that Moms are prepared. ALWAYS. Like, that's our watchword -- like, where do you think the Boy Scouts got it from?

In a group of moms, yes you'll have the Pretty One, the Foul-mouthed One, the One Who likes Vodka a little too much, The Costco/Soccer Mom, Menopausal Mom and the Crafty One. But the one thing they all have in common is preparedness.

Whatever is needed in a Zombie Apocalypse, They. Will. Have. It.
Most importantly, moms would survive the zombie apocalypse because they know that sometimes you just sit there with your kid, watching a stupid zombie movie just because your kid wants you there with her.

And you realize that, that in of itself, is a blessing.

It's Not About Me

I wonder how long this is gonna take. I mean, we went through classes but they never really gave us a time lapse of development. Realistically, this could take days...I've heard the horror stories. And how much is it gonna hurt?

Every thought was about me as we drove to the hospital that night. Every thought preceding those thoughts, in fact, was about me. I had resigned myself to never seeing my toes again, never putting on socks or shoes independently and that I'd be pregnant forever.

Even the final tipping point -- the thought that put us on the road to the hospital -- was about. ME:

My husband snored as I powered through the crampy stomach until it dawned on me: Uh-oh. I better wake him up. This baby is happening now, despite the doctor prediction's of its arrival of the next day.

Eight hours and a final push later, she arrived. IT'SA GIRL! the doctor announced. But even then, it was about me: for the nine months that she was my constant companion, I was sure -- SURE -- this baby was a boy.

I wanted to ask but didn't since my OB and at least ten residents saw this kid enter the world with girl parts and probably signed off on some certificate someplace saying that they all conferred, and that yes, this baby was indeed a girl.

Okay. I screw up stuff sometimes. Just give me my Babygirl.

I'd like to say that we looked at each other in those first moments of her life, but science says that babies can't see clearly within hours of birth. All I know is that she didn't cry. I felt like we just looked at each other for space in time that felt frozen and sacred. I'll always feel like she saw my few lonely, happy, I-gotta-get-this-right tears all the same.

That's when life stopped being about me: after all, I got picked to be this amazing human being's momma and was a primary gardener responsible for cultivating every good and perfect seed within her to bloom.

And every minute of every day of every hour since, I'm still praying I don't screw it up. 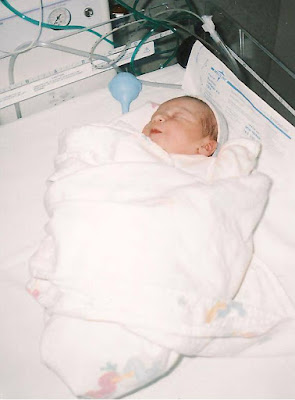