That Day, Them and Me

A group of friends and acquaintances has gathered; and, for the first time, the conversation isn’t centered on who’s paying for the next shot, or who’s “on deck” for a round of bar darts.

We are shocked, stunned and uncomfortably vulnerable after that afternoon’s horror show, now seemingly on a forever loop of planes crashing, buildings crumbling and people covered in ash.

The words fall on my ears like lead. They are heartburn eating up my chest, and I am disappointed. This acquaintance is bright, funny…and kind.

But, but…I stammered through the shock and vulnerability, almost pleading, Hold on here. I mean, did we mistrust all white guys after Timothy McVeigh…did we?

It’s my best friend’s birthday, but the smoke, sadness and fear has wiped away any thoughts of celebration texts or calls.

I make my way to my one-bedroom apartment down the busy thoroughfare that’s dotted with fast food restaurants and strip malls on either side. I espy the tiny gas station that lies about forty-five degrees off the thoroughfare and maneuver the car to make a quick exit to get there.

I want a newspaper. Not because I need the newsprint and pictures and stories to remember, but because if I ever had kids, I’d want them to know that I lived through it.

The place is thick with the aroma of car freshener and incense, and a little left of the girly magazine display are the dailies. The television’s on, replaying on loop what we all already know.

I grab a paper and the one thousand point font headline screams TERRORIST ATTACK and the full-size graphic below confirms it is, indeed, time to panic. I take the paper to the bullet-proof cashier’s window, and realize the cashier is brown. Browner than me.

Kindredship happens in that split second. It isn’t a kindredship in the whole I’m colorblind, we’re just humans who are hurting, frightened and vulnerable. No, it definitely isn’t that. I’ll never trust Them is still stuck and gunking up my innards.

It is kindredship based on remembrance of all the times I, and my brothers
, my sister, my parents and some friends had been pegged as Them.

Even though you are but one, you are All. You are Them.

Being Them is shameful, embarrassing and sometimes frightening. You have to answer on behalf of an entire group of people for the stupidity or hatred of a singular person within the group. You have to develop a duck’s back to repel all incremental and incidental insults slung when you least expect.

I feel for the guy; and, now I’m hypersensitive that I only know of middle-eastern people, but don't actually know any. Nope. So I reach out in the way most comfortable to me: I make small talk…and giggle…and smile wide and friendly.

I’m now the equivalent of the white person who strikes up a conversation with me to tell me about their black friend, or ask me how to cook greens (fyi – I don’t know, my mom never cooked greens) or ask me if I know this one other black person within the entire city or doing everything to say but not just coming out and saying I’M OKAY WITH YOUR PEOPLE.

Geez, this guy isn’t Moses. He doesn’t have any people, to let go or otherwise. I pay for the paper, hop back in the car and head home, all the while kicking myself for being too giggly and smiley and friendly and…just unnecessarily Extra.

Now, The Thems and the feelings around The Thems are uglier and seemingly sometimes state-sanctioned.

And there are many more Thems now – Jewish, Hispanic/Latino, LGBTQ, whatever side of the political spectrum with which one happens to disagree, Black Folks (a continuing role) and still, sadly middle-eastern and/or people who other people with ill-intent determine to be The Ultimate Them: Muslims.

Hate crimes against all The Thems have climbed exponentially since November of 2016.

I wonder about The Thems I pass everyday who are dealing with slights, insults, stupid questions and dirty looks. I wonder who is dealing with a hate crime but too frightened to say anything. I wonder what to do. I’m not a protester or a marcher and God’s the only One who knows about my conversations with Him.

The scene is a different gas station – this one blocks away from home. I see this brown guy almost weekly, and we talk about the weather, how my car drives in the winter or why they don’t carry the brand of cigarettes I like.

On this particular day, another awful thing has happened to the Them and it’s on national news and it’s eating me up inside. I grab a newspaper and a bottle of water. He asks how my day is, and I gulp and choke out

Are you doing okay? I mean…it can get weird around here…you know?

I look him in the eye while saying this because I want him to know that I am here, that I care. That I see him as a person – not a Them. I blink back tears that threaten to appear in the short time I asked that short question.

He doesn’t break eye contact. I know that he sees me – he sees me -- and says

Yes. We are fine. 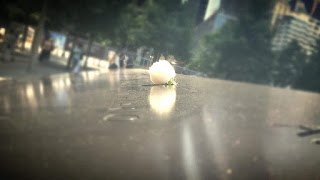