This is Our Backyard

It was only when my husband informed me that "we" had volunteered to watch our neighbor's rescue dogs while she went out of town that I realized we were living a few doors down from a lush, green respite right on our block.

Resentment over the "we volunteered" part and being bitten on the thumb by the elderly chihuahua was quickly forgotten when I finally coaxed the dogs to the backyard and discovered this. 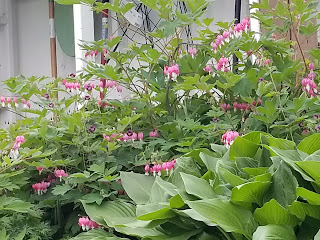 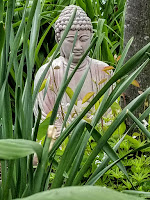 From that point on, I'd gladly shuffle Old Biter and her brother outside at wee hours in the morning, or rain or shine at night. I'd sit on the concrete path as they circled me in suspicion while I breathed in the greenery. After a while they trusted me and I forgave Old Biter...but not enough to not brand her with Old Biter as a moniker.

That was the same year the daffodils bulbs I planted a nearly a year earlier blossomed..and then died a short while after their all too brief life in the sun came to a close. They looked sad and so did our yard.

I asked Old Biter's mom how she kept her yard lively. Turns out she planted bulbs and seedlings that'd emerge in sequence: a plant blossomed, died and then another would take its place.

In hopes of replicating that cycle this year, my daughter and I took a "field trip" to our local garden center. I whined to the very helpful clerk about the dead and dying daffodils and the need for them to have plants to fill their shoes.

We left with these. 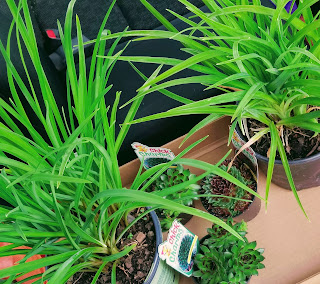 The big ones were big enough to split and then strategically plant among the dead and dying daffodils. As I carefully broke the plants apart (while apologizing, because they are living beings after all), I noticed smaller bulbs straggling at the roots.

These precious bulbs were babies. They promised future plants with the potential for beautifying my backyard like my neighbor's someday.

The thought made me handle them with extra care.

Which got me thinking about people.

In far too many decision-making circles -- whether policy-making, religious, nonprofit or corporate --  the Old Heads don't want to admit their time in the sun is sunsetting and make room for younger voices and views.

As brown children are funneled through a school to prison pipeline; as immigrant families are literally torn apart; as differently-abled folk and chronically sick see their very right to exist under threat; and as a national moral code continues to erode...

I wish...I just wish that for one minute we could see each other as plants with God-given potential for making this planet and this country a more beautiful place.

Perhaps that's what it would take for us to handle lives with extra care.
1 comment:

Given the choice, I'd take singing a solo to millions over speaking to a crowd of fifty. With songs, there's a verse, a chorus, another verse and a chorus, maybe a coda and then I'm done. Speaking on the other hand, especially without notes, leaves the verse, chorus and coda to me and vulnerable to top-of-mind tangents liable to spur other tangents that could possibly last for hours.

With that in mind, I told a story at tonight's event: nervous, shaking and determined to tell lost stories -- like those of the Fair Housing Marches held in our city a mere fifty years ago. 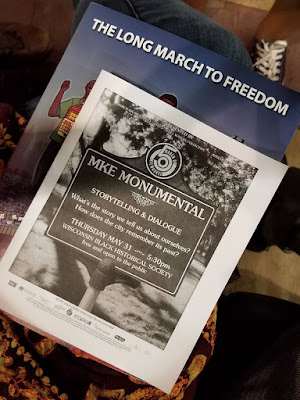 Up until 1968, there was no forceful organized push-back against nefariously embedded red tape designed to keep brown folks in one corner of the city and white folks in the other.

The march, the people who marched and the related untold histories were the centerpiece of this event that was held at Wisconsin's Black Historical Society.

Oddly, and sadly enough, I really didn't know much about this history even though its yields would ultimately impact my family and me. Without it, my mixed-race family wouldn't be living on the south side of our town because the whites in the "white side" of town wanted to keep it white. Very white. 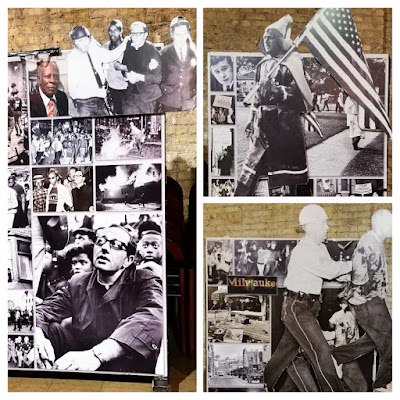 The story I told was about the discovery of who "my people" are, how we came came to live in Milwaukee in the first place, and how this history seemed to be known by everyone on the interwebs -- except me. The opportunity came through the Zeidler Center for Public Discussion and  Ex Fabula, local groups dedicated to building bridges through the sharing of, and listening to, each other's stories.

It was a story I'd told before about discovering my family history and included the names within my family that had been buried along with the people who had borne them. Speaking the names along with their stories felt as if those people were resurrected if only for that moment.

The story ended and my nerves were nearly calm when someone in the audience approached me and said I know you.

I'm at the age where I forget everything except my daughter's schedule, and searched my mental rolodex for a name to put to this somewhat familiar face.

I know you...he continued. I know Marriott, I know Cherie, I know Andrae. My eyes got blurrier and weepier as he ticked off each sibling's name.

But then he remembered for me the bittersweet joy of  hearing my long-lost parents' names uttered by someone besides myself:  ..and I know Percy Dukes and Geneva Dukes.

If someone had tapped me on the shoulder in that moment, I would've full-blown ugly-cried with snotting and wailing and gnashing of teeth. He must've known I was on the brink and graciously offered I was raised at your church...Come on and hug me, girl.

I remembered him, I knew him and hugged him tight.

Stories have resurrection power...and they can build bridges when you think all the bridges are gone.