Our five-minute-won’t-be-late-for-school-just-yet window was fast closing while I scrambled around the kitchen trying to remember whatever it was that I’d be sure to forget once we were on the road.

More precisely, the railroad crossing being crossed by a train two intersections ahead. I panicked slightly and dimmed the dashboard lights so Georgia couldn’t obsess about the clock ticking down the minutes to her being tardy. 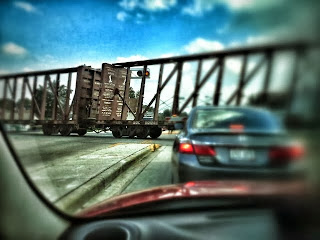 Traffic had backed up from the railroad crossing intersection to ours, but I could see far enough ahead to tell that the train had passed through. Now, those cars waited for their red light to change green.

In the meantime, our red light blinked green. I did the math and figured by the time we reached the dreaded railroad intersection, that light would be green too!

Only no one moved. It was weird. The light was green as an Irish meadow and yet no one moved. Not even one horn honked. It seemed as if time was standing still, and a blanket of “Meh” had enveloped everyone.

Not caring how crazy I sounded, I started talking to the people in the cars that time forgot at the green light:

Ever have something fall out of your mouth reflexively, and soon as it meets the air and gathers enough vibration to qualify as a sound and then words that you realize
the falling,
the vibration,
the sound
…was meant for you?

Listen, I’m a worrier -- a chronic worrier. I worry that a proposal will get turned down; then if it results in a grant, I worry that I won’t be able to meet expectations of writing another winning proposal. I worry that my daughter’s not involved in enough activities, then I worry that maybe she’s got too much on her plate. I worry about financial smooth-sailing; yet when things are relatively balanced, I worry that one or both of us will lose our jobs. I worry about how sad Charley-the-Shih-Tzu-Poo looks each day when we leave him home alone.

So, as soon I heard myself say “That’s not your red light! Move forward!” I realized that message wasn’t so much for the stalled cars as it was for me:

Worrying about so much so often is about as logical as a line of cars sitting at a green light. It’s obeying a red light at an intersection that isn’t even mine in the first place. It blinds me to the green light that’s right in my face, stops forward motion
…and steals joy that the moment brings.

Guess it’s time to stop looking so far ahead and start paying closer attention to the signals right in front of my face, huh?
2 comments:

A bird's-eye view of the ocean, a blanket of blues and violet. Could be dawn, it could be sunset. There are no undertows, no threat of menacing aquatic life and tidal waves look like silent ripples in a pond. In the middle of it all is a tiny speck of white -- or maybe yellow. It's Diana Nyad somewhere in the in the sojourn of an over fifty-eight hour swim toward the Florida Keys.

Now zoom in. Further into the journey as she reaches her destination greeted by wading well wishers and you see her emerge from the waters swollen and dazed. This scene isn't as serene as the imagined one. In fact, there's even a trace of ugliness and gritty reality there, but within that scene, we're able to hear Diana reminding us to "Never give up" and that "You're never alone." That's something that can't be heard in the idyllic birds-eye view.

Everything's prettier from a distance, don't you think? Doesn't mean that the zoomed-in gritty version negates the beauty of the birds-eye view, it's still there.

It's just that beauty and ugly exist. Together. 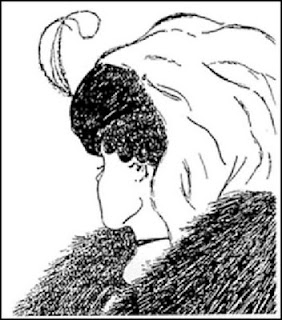 That fact seems logical enough, but sometimes it seems as though we're only able to handle one concept or the other.


We were all talking about it.

The reality of human beings disregarding the lives of other human beings was everywhere. Depressing as it was, I think it was a good thing. We started feeling vulnerable. We started looking at each other as humans again and at least thinking about how, maybe -- just maybe --we really are connected regardless of social class, race or ethnicity. We even mourned each other's losses.

Then all the talking stopped, all the coverage stopped. But not because the shootings stopped.

It was the week of celebrating Harley-Davidson's one hundred tenth anniversary and because Milwaukee's the birthplace of all and everything Harley-Davidson related, the community welcomed Harley riders from all over the world who came to celebrate. It was the week to talk about how wonderful the community was, not gun violence. There was a lot of talk about how rich we are in our traditions and what a welcoming spirit we have.

We proved it too. Watering holes, restaurants and even churches plastered "Welcome Home Harley Riders" signs and spontaneous block parties broke out everywhere. Goodwill and brotherhood was contagious. Out-of-town and out-of-country visitors were on the news left and right, singing Milwaukee's praises in the dialects of their country of origin. All the Harley riders and their Milwaukee hosts might have even held hands and sang Kum Bah Yah around a campfire someplace. Don't get me wrong. My family enjoyed all the hoo-hah too, and Georgia and I even went to the grand parade to soak up the excitement.

But still. The wall-to-wall coverage. All Harley-Davidson celebrations, all the time, with the conspicuous absence of gun violence coverage. On every local news outlet.

And I wondered why is it that we can't reconcile that we've got some very real, very tragic problems with gun violence and at the same time, acknowledge that we live in a wonderful welcoming place with rich traditions and where goodwill and brotherhood is contagious.

I don't know...I couldn't help but think that we sell ourselves short when we choose to focus solely on the idyllic. Sure, that birds-eye view keeps us safe from the menace of threats, and we're deafened to the sound of crashing dangerous waves...

...but it's only when we choose to also zoom in on the ugly grittiness of idyllic scenes are we close enough to hear desperate, hopeful reminders to "Never give up" and be reminded that we're not alone.
Because after all, beauty and ugly exist. Together.