This Too, is MLK


Years ago, I was watching the scene in the movie X when Malcolm's mentor greets him by saying Assalamu alaikum, and in my head, I responded Alaikum assalaam.

WHERE DID THAT COME FROM? I asked myself. (FYI, the phrases are Arabic greetings often used by Muslims, meaning Peace be upon you and Unto you peace.)

I certainly wasn't a closeted Muslim, in fact I grew up a card-carrying-dual-faith Protestant of Baptist and Lutheran traditions. On rides to church, my family listened to WNOV -- a black-owned radio station whose regular Sunday rotation included Gospel music and sermon excerpts.

Usually in the time it took for us to get from home to church, the gospel music and sermons wound down, and gave way to programming from the Nation of Islam which always began with Assalamuu alakum and Alakum assalaam. That's all we heard. But it stuck with me.

Looking back, I'm realizing how forward-thinking it was of this radio station to make space that represented black people in all their layers and all their faiths whether Baptist, C.O.G.I.C., A.M.E. and yes, even Muslim.

Haven't heard the MLK of 2018 perverted and twisted yet? Give it a minute. I guarantee you will.

Then again maybe you won't. For sure, you'll see much of the hope that Dr. King espoused. Beautiful quotes from his I Have A Dream speech will flow freely today. In fact, our current president has already videotaped a hollow commemorative message referring to it.

Instead, I want to hear the multi-layered, human MLK today, I want to hear his commanding oration, the congregation's response when he talked about his daughter's wish to go to an amusement park and his heartbreaking, but hopeful explanation to her of why she couldn't.

Thanks to WNOV, I'd heard that sermon countless times on our way to church. I always liked it, but at the time didn't know it originated from one of his most prolific writings Letters From A Birmingham Jail.

The whole of the Letter's text parallels an MLK that probably won't be celebrated or quoted today. He speaks with spirit, love, but also exhaustion, exasperation and judgement at the country's inability to understand reasons for black people's unrest, as well as the complicity of white Americans who knew things were wrong but chose to keep silent. 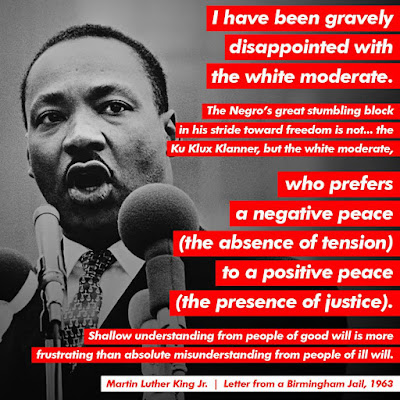 This parallel MLK is the one I need to hear from and celebrate today. Like him, I'm exhausted and exasperated...but still hopeful.

So I guess the only wish, the only greeting I can give on this day is Alaikum assalaam...anyway.