Everybody's Got an Old Faithful

I was lost in the middle of throwback bliss perhaps induced by a menthol bubble bath when my daughter, who was in the basement doing her workout during this too-brief minute of sillyness and relaxation, came upstairs and threw a wrench in it all: MOM, THE BASEMENT TOILET IS OVERFLOWING!!!

My head and body's towel-wrap along with my rapping was interrupted. I sprang out of my makeshift sauna down the stairs to find that, sure enough, our basement toilet was springing like Old Faithful. 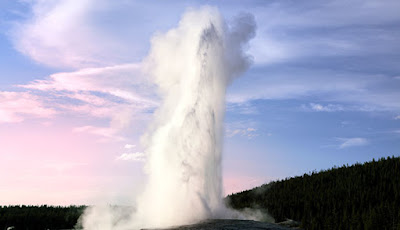 Then a funny thing happened.

The rapping in my head stopped, and the water seemed to gurgle in slow-motion. The water was going to keep on doing what it was going to do and there was nothing I could do to stop it.

I was helpless, and it felt okay.

You know what? Get all the towels out of the linen cabinet and we're just gonna soak it up.

She nodded, disappeared and came back with every towel in the linen cabinet that we bought and or inherited. By that time, Old Faithful reneged on its faithfulness and stopped its gurgling. All we had to do was sop up its water.

Later, my husband returned from his Boy's Night Out to find...well, what happened. He called a plumber thereafter and explained Old Faithful's faithfulness had something to do with a an external drain that had, like many post-WWII homes in our neighborhood, too much stuff to keep in any longer.

That's when my mother's voice rang back to a mysterious angst-ridden teenaged me who wouldn't talk about angst-inducing stuff:

I don't know what's going on honey, but I do know there's more room out than there is in.

Simply put, a body can't have too much stuff stuffed inside. There's just too little room inside a body for all that stuff. Overstuffing inside is the cause of a lot of Old Faithfuls in national parks on the outside and a lot of personal geysers on the inside.

The thought of me rapping Rob Base and DeeJay EZ Rock with my head and body wrapped in a towel, throwing towels -- good ones or otherwise -- every which way, is funny. It really was and still is.

The part that isn't funny is the haunting of stuff we keep in: resentment, anger, unforgiveness, insecurity, bias, regret, grief and a whole host of wouldas shouldas couldas.

Okay, maybe it's not everyone -- maybe it's just me and the stuff I keep in.

On second thought, maybe it really is we. A quick look at the headlines and polls will leave any sane person thinking that everyone in the U.S. is haunted by ghosts of our collective or individual pasts...or avoiding them.

Either way, everything eventually finds its way out. There is, after all, more room out than there is in.